BEHIND THE SCENES AT INDIANA'S PREMIER WEDDING VIDEOGRAPHY STUDIO
What’s on your TiVo?
Bob  January 30, 2007 1
Share

I’ve been in the IndyVisual kitchen the past week cooking up some cool new ways to display and share our work with our clients and website visitors, so I’ve been a little more under the radar than usual. Hopefully I’ll wrap that all up soon, as one of my three months of down time is already slipping away. The bookings have been incredible so far in January, even more than usual, so that makes this down time that much more precious. I’ve already taken my boys out for a couple of fun weekends away. We spent last weekend at the Holidome in Columbus, at Great Times on the south side, and looking at RVs and boats just because I never have before. It’s amazing how easily entertained the kids are when they get out of the house.

I’ve heard the question “What’s on your iPod” used in many interviews to provide insight into the interviewee, but my own answer would be that I don’t own one. But in what I consider to be a modern “golden age” of television, perhaps what’s on my TiVo could be just as revealing about me: Apprentice, Desperate Housewives, Battlestar Galactica, 24, Heroes, American Idol, Lost, 30 Rock, The Office, Scrubs, Grey’s Anatomy, Entourage, Ebert & Roeper, ESPN’s Sports Reporters and Sportscenter. Oh, and the Colts/Patriots game, which may take me awhile to delete. What’s on yours? (If you don’t have one, trust me – best…invention…ever!)

I will resist every urge to turn this into a sports blog, but for the past several days, I have been living and breathing COLTS! I was at the crazy game on Sunday with my buddies, with whom I have held season tickets since 1995, and the drama and ultimate euphoria was like nothing I have experienced since I was on campus for IU’s 1987 national championship. I have closely followed every Colts game since they arrived in 1984, and so I’ve endured all the hard times, which only makes this Super Bowl trip even sweeter. (And by hard times, I don’t mean a 12-4 season followed by a playoff loss. I mean several 1-15 or 3-13 seasons and one 0-13 start. THAT was tough!) Prior to and since Sunday, I have been scrounging around for every online article and every morsel of TV and radio coverage I can find, which my doctor says is a classic symptom of “blue fever,” also known as gocoltitis. If you have similar symptoms and need support from a fellow sufferer, feel free to call or e-mail me. If you’re a current client, I promise I’ll still get some work done. GO COLTS!!!

Much of last Saturday was spent at the Ale Emporium in Fishers with a couple of fellow IU and Colts fans to watch both teams play. IU’s win over Penn State was certainly nice, but the real excitement was over the Colts’ grind-it-out win over the Ravens, which I predicted. Then I became a huge Patriots fan on Sunday, as I knew that a Pats win would mean an AFC Championship game at home, and the Pats pulled that one off. So after missing the win over the Chiefs in order to cover a wedding (I’m also bummed that my friends only got face value for my ticket), I’m thrilled beyond words about being in the Dome this weekend to send the Colts off to the SUPER BOWL!

I also popped in on the bridal show at the Ritz Charles to say hi to some fellow vendors. I was impressed with how many repeat vendors were there, the sign of a successful show, so I will certainly consider trying to get a booth there next year. Then I took my boys to stay overnight at the Hyatt downtown ($45 on Priceline!) so Mommy could have a couple of days away from the rascals. We had fun roaming around the hotel, the SkyWalk system, and Circle Center, then swimming and playing video games in the room.

I’ve spent the rest of the past week doing a lot of odds and ends as well as editing Sara & Alex’s wedding from a couple of weekends ago. Although I usually expect an uptick in phone calls from brides in January due to the busy bridal show season, I’ve been more swamped than ever with inquiries these past couple of weeks. It seems that a lot of people out there, clients and vendors alike, have been telling brides about us, so I am especially filled with gratitude and humility for that. Thanks also to Ryan McKeever of Magic Hour Productions for treating me to a wonderful lunch on Wednesday!

I have a couple of video clips and thank you notes to share, but I will hold off on posting anything new until I complete a website update in the next week that will change how our video clips are seen and shared. 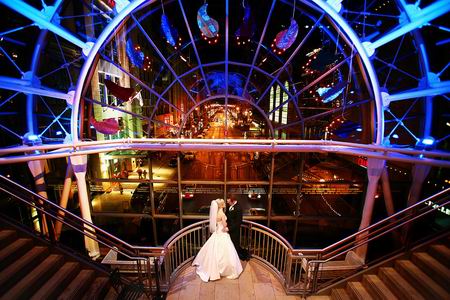 The majority of last week was spent getting ready for the two-day Perfect Wedding Guide Bridal Show at the Scottish Rite Cathedral, and the past few days were spent basically recovering from the show. In the middle of all that showmanship, I was also scheduled to videotape a wedding on Saturday evening, which certainly made for one hectic but fun weekend.

Sara & Alex’s wedding and reception took place at the luxurious Conrad Hotel downtown, which was already abuzz from the Colts playoff game that was happening at the same time. (Needless to say, I had to scalp my ticket.) Rebecca Raymond of Event Fantastic, who referred the couple to me (thanks, Rebecca!), was given what every consultant dreams of – the green light to do whatever she wanted. The result was a fantastic winter wonderland theme involving white petals, street lamps, bare trees, and her signature self-serve (white) candy station. Kevin and Alicia Monahan of Kevin Monahan Photography took the couple to the neighboring Artsgarden after the ceremony for some fun shots, one of which I’ll post below, and they were a joy to work beside the entire night. The reception was turned into a nonstop R&B and disco rave-up courtesy of the band Zannadoo, who have quickly become one of my favorite bands. This was actually the first time that I saw Zanna fronting the band, and boy could she belt! 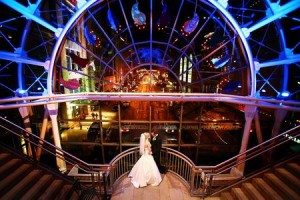 I’ve never been a big fan of doing bridal shows, largely because of the cost and the pain of transporting my plasma screen to and from the shows. But the new two-day format of this particular show was a stroke of genius on the part of the PWG folks, as it allowed us to mingle with almost twice as many brides as usual, and it divided all the moving hassles over two days. (It was nice to just walk leisurely into the Scottish Rite on Sunday morning and have everything already set up from Saturday.) I had a fun time at the show meeting with current clients who came by to say “hi,” answering questions for prospective clients, and networking with my friends in the vendor community, several of whom were displaying our work at their own booths. This was the first time that I was honestly happy with the presentation of my own booth, as I finally updated my flyers to work together visually and found a layout for our materials and equipment that was appealing yet practical. This was also the first time that I played our video clips off of a PC instead of a DVD, which was great because it allowed me to show off some of our high-definition footage, and it allowed me to easily stop the presentation in order to show certain brides clips from specific venues. My only regret was that I didn’t have more down time to walk around and chat with other vendors there, but I guess that’s the sign of a successful bridal show.

New Year’s Day has always been one of my favorite holidays. It’s a more “quiet” holiday than Christmas with much less hype (at least after midnight), and I’m a sucker for all of the great football games on TV and dorky year-end lists in the entertainment world. Best of all, it represents for me a time to contemplate the excitement and possibilities of the year ahead. There is much that I am becoming excited about in what is shaping up to be another record year for IndyVisual… The introduction of HD wedding videography to the Indy market. Another major upgrade to our website. A destination Caribbean wedding in St. Kitts. And many other beautiful weddings with wonderful clients and vendors in the area’s best venues. If you are a fellow wedding vendor, then I am looking forward to working with you and comparing notes about your goals, hopes and dreams for the new year. And of course, if you are a newlywed-to-be, then few of us are going to have quite as much to look forward to in 2007 as you are, and I look forward to being a part of your big day. As I often tell people, it’s so much fun to be in the “happiness” business, so here’s wishing a Happy New Year to all of you!