As you can tell by this video clip, there were many tears of joy shed during Lisa & Adam’s big wedding weekend. The fun started with a rehearsal dinner at the Skyline Club, home of the city’s most incredible view. Then I joined the ladies the next morning for preparations at the Omni Severin Hotel, followed by a tearjerking meeting between Lisa and her dad in his penthouse suite. The wedding ceremony took place right around the block at St. John Catholic Church. The laugh you see on the altar followed my favorite moment when Lisa accidentally started to say Adam’s vows, a cute nervous moment I didn’t notice until editing their audio today.

Photographer Angela Talley and I followed the bridal party after the ceremony in a tiny VW Bug owned by Angela’s assistant Whitney (who just got married last week!) to the Indiana State Museum for some fun shots by the canal. Then we joined the bridal party on the shuttle for a hilarious ride back to the Omni. It was nice to have plenty of time leftover to capture the beautiful decor provided by Bloomz. The butterflies on the cake were a touching tribute to a beloved relative who said she saw white butterflies before passing on. After some formalities, DJ and friend of the couple Dave Galt did a superb job of running the show the rest of the evening. 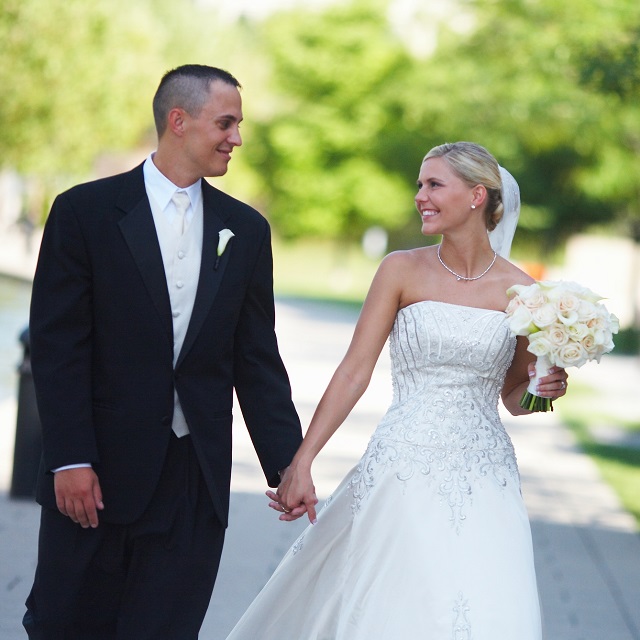 Rich covered the majority of Clare & Derek’s wedding day, but I was lucky to be there for Clare’s preparations at the Omni Severin. Clare was such an effortlessly elegant and beautiful bride – the name “Audrey Hepburn” kept popping up throughout the day. The ceremony at SS. Peter & Paul Cathedral was equally classy. In a particularly poignant touch, a picture of Clare’s dearly departed father was included in her bouquet provided by McNamara Florist, ensuring that he would be with her as she walked down the aisle. The ceremony was punctuated by a humorous military saber-arch send off for the couple.

Everyone returned to the Omni for an evening of celebration expertly coordinated by consultant Kay Krober and her staff. All the formalities had nice little twists to them, including the use of a saber to cut the cake, and a very creative garter removal. The music provided by Sunny Moon associate DJ Matt Rawlins kept the crowd hopping well into the night. I only wish I could have been there at the end to grab some of the goodies from Harry’s – my favorite spot from my post-IU days in West Lafayette. Special thanks to the Omni and photographer KC Ferrill for referring this beautiful couple to us!

A lot has happened behind the scenes here at IndyVisual over the past couple of weeks, hence my shortage of posts until yesterday. What’s kept me the busiest is moving into a different room within our office building to make room for other tenants, consolidating three rooms and 15 years worth of stuff into one. (Note that our address is still the same.) Amazingly, our operation fits comfortably into a single room, and I already feel more productive with everything I need right at my fingertips. It’s nice to have a fully-leased building for the first time in a few years, and I’m excited about the improvements our tenants are planning to make to the building. I’m even more excited to finally be back in the full swing of editing.

Due to all this craziness, our 15th anniversary mark came and went without much fanfare last week. I was hoping to make a little more noise about it, but I suppose being too busy to celebrate is a good problem to have. I made my first dollar (yes, it’s framed, and I’m a dork) on September 17, 1993 editing an episode of the “Dan Palmer Show” for local TV under the name Ridge Community Video, which I quickly changed to On the Spot Productions, a name that stuck until the year 2000. Going through so much stuff (old equipment, masters, files, etc.) during the recent move was like walking down Memory Lane, and hopefully I’ll still find some time and a way to share some of these memories with you.

One future memory I’m looking forward to is another destination wedding which we just booked coming up in January at Playa del Carmen near Cancun in Mexico. After the one I shot in St. Kitts last year, I figured it would be another 15 years before I’d have the opportunity to videotape in paradise again. But I could definitely get used to doing this every other year! Special thanks to well-traveled photographer Angela Talley for selling her client on the idea of hiring a videographer.

Just a couple of days ago, I was generously invited by consultant Kay Krober to be the official videographer for next year’s edition of the Association of Bridal Consultants’ annual convention called Business of Brides 2009. (“BoB” for short – I love it!) I can’t thank Kay and the ABC enough for thinking of me, and I’m looking forward to what will undoubtedly be our biggest yet most rewarding endeavor next year. Now if I could only get the Jackson 5’s “ABC” out of my head…

I also learned that we finished in the top five of the WRTV IndyChannel.com A-List for the second year in a row. The A-List is really a clever sales campaign that rewards businesses who solicit the largest number of votes (i.e., sales leads for WRTV), and with over 500 clients to hit up for votes, we could probably do pretty well. But after one day of voting in 2007, I decided I had better things to bother my clients with than voting for me year after year for a poll doesn’t really measure quality, and I’ve ignored it ever since. So to finish in the top five again (which I learned by receiving special advertising “offers” via e-mail, ha!) without soliciting a single vote is actually kind of neat, and I appreciate those of you who nominated and voted for us anyway.

What DOES mean a lot more to me than popularity contests is quite simply how well the business is doing, and to that end, we just booked our 50th wedding for 2008! That’s just a ridiculous number to me, and all I can do right now is keep pinching myself. This has truly been a special year that just keeps getting better and better, and I’m so thankful to be so blessed with great clients and friends in the wedding industry who continue to make it happen for us.

And last but certainly not least, our own senior videographer, Emmy-nominated producer, dear friend and all-around overachiever Laurie Buschmann just returned from a weekend in Charleston with a new title – BRIDE-TO-BE! I can’t begin to describe how happy I am for her, so I won’t even try. Suffice it to say she has earned every ounce of happiness that she is feeling right now, and it’s about time! I’ll leave you with a snapshot that I took the minute I realized Matt was “the one” for Laurie…minutes after they met!

“Hey, it’s Video Bob!” A dozen years after covering the wedding of Rachel’s sister Heather, it was nice to hear their family’s old nickname for me again throughout Rachel & Chris’ big day, starting with a ceremony at the Indiana State House. Then the party drove to Monument Circle for some shots with photographer Andrew Scalini while I settled in at the Conrad Hotel (whose Liz Mok also gave the couple our name), where consultant Josh Gurvitz and the creative folks at Posh Petals got the swanky ballroom ready for a big night. The amazing band Zanna-Doo rocked the house with their mix of disco, R&B, classic rock and crowd-pleasing 80’s singalong anthems, upstaged only on occasion by the very spirited groom, who plays a mean cowbell. As fun as this group was before midnight, I can’t begin to imagine how the afterparty in the adjacent “Club Evens” was, but it’s probably a good thing I wasn’t there to roll tape!

Lisa & Chris were married by Reverend Marilyn York in the ornate theater of the Scottish Rite Cathedral, surrounded onstage by majestic floral arrangements created by Kathy’s Kloset. Afterwards, we headed across the street with photographer Dawn Fisher of Galleria Studios for some photos while Tonya Shadoan of Circle City Planners scurried behind the scenes to get the ballroom ready for the reception. Thomas Caterers of Distinction provided a wonderful meal (highlighted by a melt-in-your-mouth carrot souffle) and a nifty sundae bar for dessert. Jason Fritz of Pro-Sound Entertainment entertained like a pro, guiding everyone through the usual formalities with the added surprise of a birthday cake for the bride’s sister. 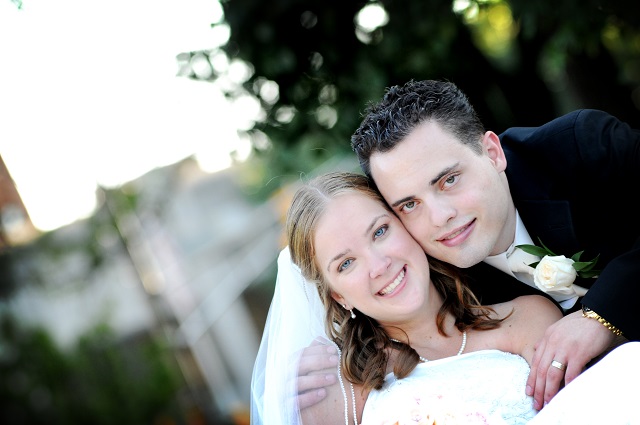 The Lazzara name is synonymous with the Ritz Charles, and I’m so thankful that the folks there thought of us to cover this very special day in the Ritz Charles family. Kelle & John’s coverage began with an elegant rehearsal dinner in the Wood Room at the Hilbert Circle Theatre on Monument Circle. (Ironically, the last time I shot there, Kelle’s father Chuck and his staff catered a rehearsal dinner for a Hilbert wedding a dozen years ago.) The following morning, I joined the ladies in the penthouse bridal suite at the Omni Severin for some preparation coverage and a stunning rooftop view of downtown.

Laurie took over at St. John Catholic Church, where Kelle & John exchanged vows before heading off to the Canal and the Indianapolis Museum of Art for some great shots with photographer Angela Talley (who also referred the couple to us). Meanwhile, the huge group of guests filled the pavillion at the Ritz Charles for the most extravagant cocktail hour I’ve ever seen before taking over the entire main building for the reception. The jaw-dropping decor was highlighted by the arrangements of McNamara Florist‘s Alan Thompson, and the ballroom (which I had never seen opened to full capacity) was a sight to behold. A great time was had by all, especially once the Chicago band Front of House took over for the rest of the evening.