Whitney & Wes, which much help from Circle City Planners (thanks for the referral, Tonya!) and Royal Creations, pulled out all the stops for a spectacular wedding and reception in the Crowne Plaza at Union Station‘s Grand Hall.

After an emotional first meeting between the bride and groom, we all went outside for some shots with photographer Jessica Strickland while some amazing finishing floral touches were put in place. In addition to a ginormous ball of flowers hanging over the aisle, an even greater number of petals were meticulously arranged on the aisle runner, matching a pattern in their decor. Just before the recessional, I had this crazy idea of tossing some of these petals at the couple as they walked out, which I texted to Tonya, who then made it happen.

Whit’s reaction to the room after it was transformed for the reception was priceless. I had a similar reaction to the individual chocolate concoctions that were served up for dessert in lieu of the traditional wedding cake. DJ Brian Whitis, already in place from his ceremony music duties, presided over a fun-filled and unpredictable evening, the highlight of which was a classic cat-fight over Whitney’s tossed bouquet.

See the details of this wedding on Circle City Planners’ blog!
Enjoy some of the amazing images on Jessica Strickland’s blog! 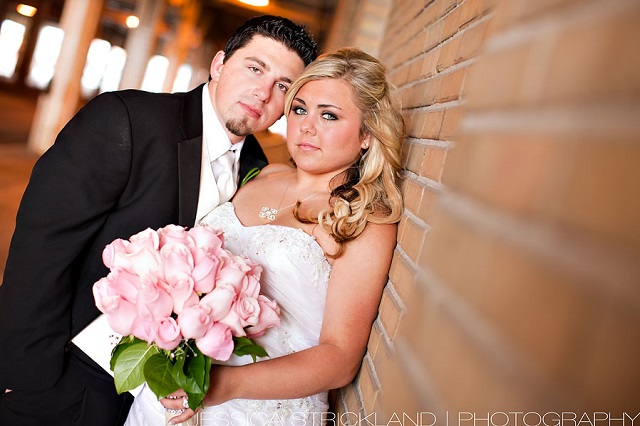