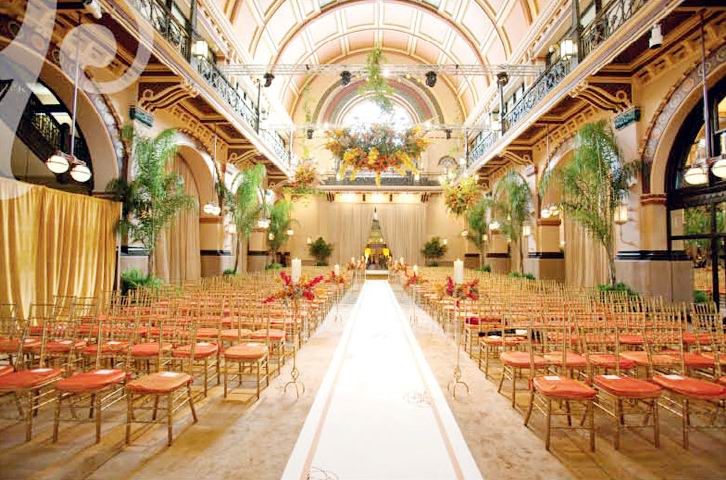 It was an extravagant spectacle right out of Hollywood with the coolest, most down to earth couple at the center of it all. Ten years after shooting Rachel’s 16th birthday party, I had the pleasure of being there for another milestone as she and Hale became one at the Crowne Plaza at Historic Union Station.

Coverage started with a superb rehearsal dinner at the Indianapolis Museum of Art the night before, then continued in the 14 West penthouse the following morning as Leslie Jones helped Rachel get ready for the big day. Meanwhile, the amazing team of Premier Events‘ David Jackson, Palmer Kelly Design and Evans Audio-Visual all topped themselves in completely transforming the Grand Hall at Union Station.

After an eloquent ceremony officiated by spiritual author Marianne Williamson, the guests were treated to fabulous dinner entertainment by the Indianapolis Symphony Orchestra and the Indiana Ballet Company. Then New York party band Starlight Orchestra took the stage and simply blew us all away. It was a treat of a lifetime to work with so much talent, along with friends like Jennifer Driscoll, Sunny Moon and Indy Photo Booths.

I won’t be posting a video clip, so hopefully these fabulous detail and decor shots from Jennifer’s blog post will convey at least a taste of the beauty and magnitude of this most unforgettable day in celebration of a wonderful couple.

Darcie & Jonathan – 10/17/09
Bob  January 14, 2010 0
Share
Darcie & Jon are such a fun, spirited couple who enjoyed a fun fall wedding and lively reception in the Grand Hall at the Crowne Plaza at Historic Union Station. After their first meeting, we took a trolley to White River State Park with photographer Troy Hill for some fun shots while designer Debbie Watson of Distinctive Designs put her final touches on the gorgeous decor in the Grand Hall for the ceremony. In addition to providing beautiful uplighting for the room, DJ Brian Whitis presided over a fantastic reception in which Jon & Darcie were glued to the dance floor the entire evening. Big thanks to the Crowne Plaza folks and Jessica & Mark Andres for introducing me to this awesome couple!

Photo by Troy Hill Photography
(Check out Darcie & Jon’s photo slideshow at Troy’s website!)
Vanessa & Eric – 9/26/09
Bob  January 2, 2010 5
Share
I could write a book about Vanessa & Eric’s beautiful wedding at Holy Rosary Parish and wild reception at the Montage, but I’ll keep it short by listing some of the many unique things I loved about this weekend: Scroll invitations. Luau rehearsal dinner. A perfect miniature replica of the wedding dress. The coin exchange. Doves. M&Ms personalized with the couple’s faces. Ribbon pulls in the wedding cake. Accordion player. Belly dancers. Fireworks. And especially the Mardi Gras-like “Crazy Hour.” Add a fun couple who’s all about having a great time, service by Kahn’s Catering (thanks for the referral!), decor by McNamara Florist, music by Lakeside Entertainment and transportation by Antique Limo of Indy, and you’ve got one very unforgettable evening. This photo by Joe Defabis sums it up nicely. 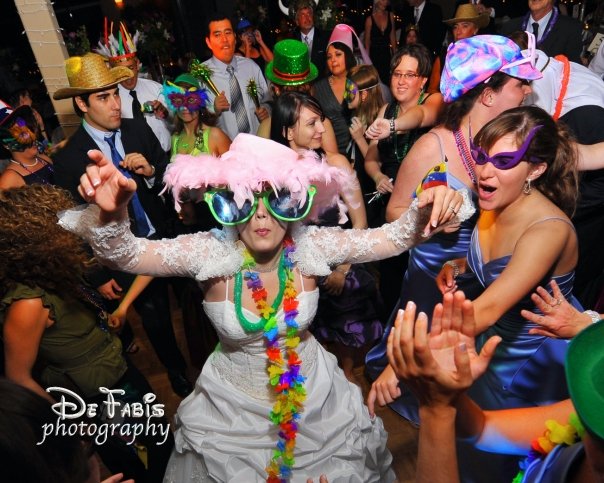