After a first meeting at the Renaissance Hotel, Kim & John enjoyed a fantastic wedding and reception at the Bridgewater Club.  Kim looked fabulous sporting makeup by Kiralee, and Anthony Wilson of On3 Photography was on hand to capture the first meeting as well as some fun shots around Carmel.  The ceremony was performed “in the round” by Dr. Scott Toussaint as the couple exchanged vows under a stunning floral chandelier created by designer Jim Holland.  Jim also helped transform the crystal-filled reception room alongside consultant Gloria Boyden (who referred this wedding to us), Evans Audio/Visual and the mother of the bride, who handled much of the amazing stationery and paper products herself.  I got to enjoy seeing Dave and Rae rock the Bridgewater for the second time in a month, while the guests hammed it up for Chad Franz and his Freezeframez photo booth. 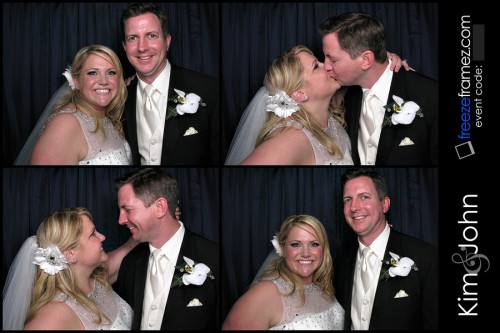