Tiffany & Ed are one of the most fun couples I’ve ever gotten to know, and they brought a unique element of excitement to every aspect of their wedding day, from their ceremony at the Scottish Rite Cathedral to their reception at the Crowne Plaza at Historic Union Station. The guys started the day with shaves at Red’s Classic Barber Shop while the gals got ready at Crowne Plaza. After a beautiful ceremony in the Scottish Rite theater, plus a YouTube worthy recessional by the bridal party, we all headed to Monument Circle for photos with Dawn Fisher of Galleria Studios.

This airline pilot & hostess knew just how to make the party “take off,” with their “Top Gun” intro leading into a hilarious fake first dance. A candy station, cigar bar and late night McDoubles were nice touches as well throughout the evening. The Grand Hall looked splendid thanks to lighting by Evans Audio Visual and decor by Circle City Designers, and Randi Neukam of Circle City Planners (who referred Tiff & Ed to us) was there as well to oversee all of the day’s events. 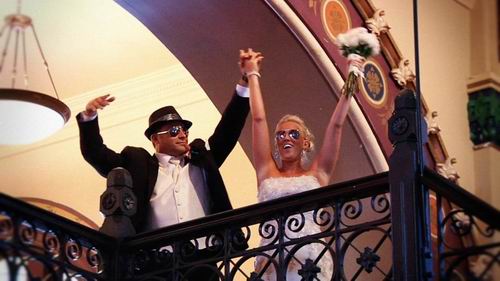