Indianapolis Colts Pro Bowl safety Antoine Bethea invited many of his fellow playmakers and friends to the Colts Grille for a launch party and fundraiser for his new charity, the Safe Coverage Foundation, benefiting youth in several communities.  There were some very sweet auction items including signed jerseys by the likes of Michael Jordan, Wayne Gretzky, Albert Pujols, Aaron Rodgers, Tom Brady and of course Peyton Manning.  I had a blast mingling with Antoine and other Pro Bowl players such as Reggie Wayne, Dallas Clark, Joseph Addai &  Robert Mathis, and it was great to catch up with team captain & former client Gary Brackett (who confirmed that he loved his wedding film – yay!).  The gals from Eventfull Planning, along with Molly Connor Photography, Pink Poppy Ink,  Sweet Pea Floral and Evans Audio Visual, did a superb job of not only implementing the event, but handling the very busy checkout line after a successful evening. 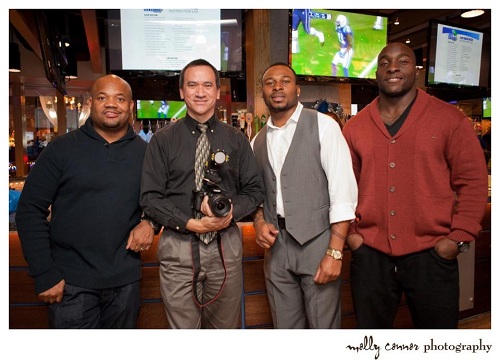