One weekend after videotaping another wedding and reception at the Scottish Rite Cathedral, I returned to cover Tiffany and Brian’s big day, also coordinated by Circle City Planners (Tonya this time), who have thankfully helped me fill many of my fall dates. Photographer Andrew Scalini and I captured the bride’s preparations as she got ready for her first meeting with Brian, preceded by a thoughtful delivery of flowers and a card from the groom. After their tender first meeting and some photo time, the ceremony in the auditorium was underway, with the groom’s father presiding over the wedding.

The ballroom was beautifully adorned by McNamara Florist, and the reception commenced with the usual splendid cocktail and dinner service by Thomas Caterers. After an upbeat first dance over a monogram spotlight, an evening of timeless rock and roll kicked off courtesy of the endlessly energetic Endless Summer Band. The evening was highlighted by the hilarious presentation of a hot dog statue – yes, a hot dog statue – to the couple by the groom’s buddies, thus continuing a tradition of pooling their funds to buy unforgettable gifts for each other’s weddings. 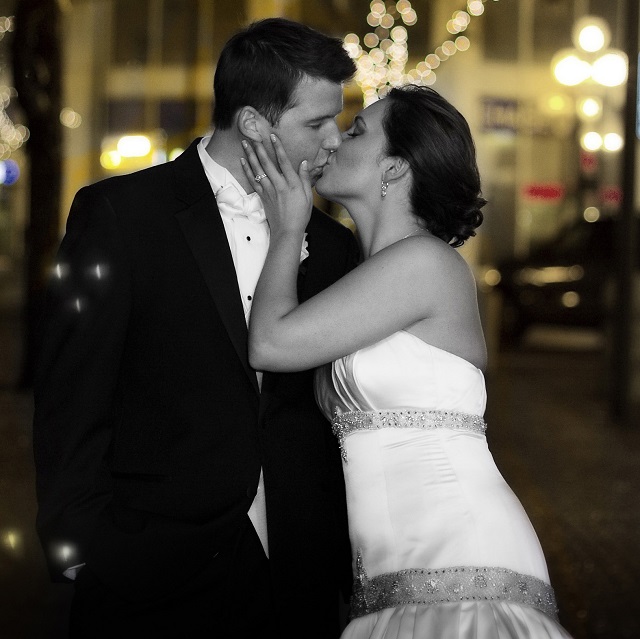 All of the weddings I videotape are special and poignant in their own unique way, but Lyndsey & David’s wedding day has certainly got to be one of the most tear-jerking ones I’ve ever covered. After a brief rehearsal at the Scottish Rite Cathedral, we gathered at Milano Inn for some fun festivities that included many surprises, including not one but two groom’s cakes representing his two loves, his dog and a certain pro football team from Boston.

The wedding day started with hair & makeup at Lyndsey’s family home, where the bride squeezed in some quick dance lessons (Soulja Boy & Cupid Shuffle). Then the preparations continued at the Scottish Rite, where everyone just about lost it when Lyndsey’s tearful dad Craig first saw her in her wedding gown. The tears would continue all the way down the aisle of the auditorium when he had to take a moment to compose himself enough to give her away. Ann Conrad and Ken Knowles from my church provided some amazing music, and it was sweet to see David’s grandfather standing up with him as his honorary best man.

The auditorium and ballroom were splendidly decorated by Darcie of Circle City Planners (who thankfully referred the couple to us) and Royal Creations, with plenty of touches commemorating loved ones who had passed on. Also particularly moving was the presence of several of Lyndsey’s patients from the Peyton Manning Children’s Hospital where she works, including one lucky girl who received a Build-A-Bear Bride. There was plenty of laughter as well, including a bouquet toss that would have made her hospital’s namesake proud, nearly hitting the huge chandelier and completely overshooting the single gals after telling them to move closer. 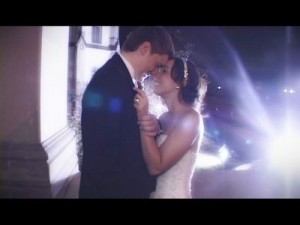 The event date for this post is November 1, and it was certainly an amazing day, but it’s October 31 that everyone involved in Jennifer & Mike’s big weekend still talks about. That would be Halloween, Jennifer’s favorite holiday, when the couple held a spooktacular rehearsal dinner at Crown Hill Cemetery‘s Gothic Chapel. All the guests and vendors were advised to dress accordingly, and I think I improvised pretty well on a $5 budget and last-minute shopping trip (see below). The couple arrived in a hearse, and the ghoul times commenced from there, with a scary good meal served up by Great Cooks and Company.

The wedding day brought me back to the amazing new Central Library for the second straight weekend. The library theme was ingeniously integrated into every aspect of the wedding, from the “Save the Date” cards resembling due date cards to the card catalog style “guest book” and on through the cake and programs, with actual books for favors. Tradition played a big role as well, with Jennifer wearing the same dress during the ceremony that her mother and grandmother had worn at their weddings. Her wedding ring and cake server have also gone back multiple generations.

Jennifer’s vision was brought to life by consultant Monica Richard (who kindly refered the couple to us) and designer Gene Huddleson, both of Detail + Design, as well as the Library’s own Flik Catering service and Evans Audio Visual. The huge Indianapolis Jazz Orchestra filled the equally huge space with timeless big band classics that had everyone dancing. And my friend Angela Talley was there with me to photograph every last detail of this unforgettable chapter, right up to Jennifer & Mike’s departure through a sea of “Flutter Fetti” streamers. 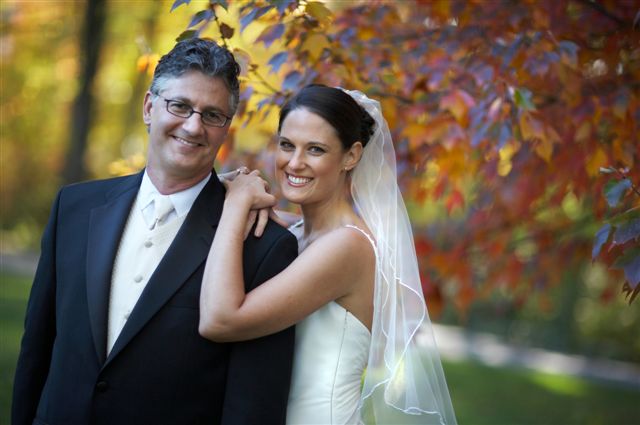 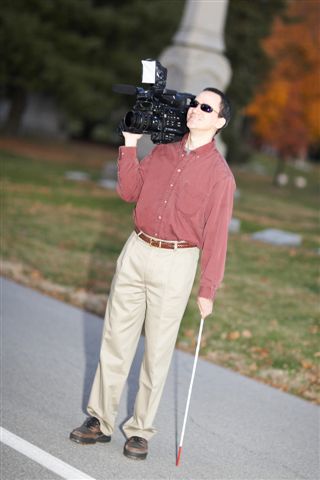 Three years after I videotaped their first daughter Amy’s wedding day, the Draper family kindly brought me back to cover Mandy & DJ’s nuptials at Our Lady of Mount Carmel Catholic Church. The reception took place afterwards at the Marriott North, where this ready-to-party crowd (the Super Bowl Shuffle even made an appearance!) rocked out to music by the great Chicago band Maggie Speaks. It was a pleasure to work again with the reunited vendor team of consultant Leslie Jones, photographer Larry Seidman, and McNamara Florist‘s Alan Thompson. Most of all, it was a joy to be part of another special occasion in the lives of such a warm and loving family.

Molly & Seth exchanged vows on what started out as a rainy Friday evening at the beautiful Sacred Heart Catholic Church just south of downtown. Amazingly, right before the ceremony, the sun defied all weather forecasts and broke through the clouds, convincing all of us that Molly’s sister was smiling down on her from Heaven on her special day. Photographers bobbi+mike took advantage of this break and got some lovely shots of the newlyweds outside the church.

The reception at the newly expanded Central Library was an experience to behold, with nice floral touches by Kathy’s Kloset, lighting by Evans Audio Visual, catering by Flik, and the usual rockin’ music by Zanna-Doo bringing energy and intimacy to this tremendous space. Family friends Carlie Oakley (who referred Molly’s mother Barbara to us) and Rayna Traylor lent their valuable expertise at the ceremony and reception respectively.

We don’t have a whole lot of self-described “blog stalkers” that I know of, but Jennifer has been one of our favorites for quite a while now. So it was with much excitement that I finally got to shoot her and John’s wedding on another lovely fall weekend. The coverage started with a rehearsal dinner at the Skyline Club overlooking downtown Indy, with John’s uncle Rob providing some unplugged classic rock throughout the evening. John’s Vietnamese heritage was evident in the decoration of their cake, which I was happy to help them practice cutting as preparation for the “real” thing the next day.

Everything on the big day took place at the Omni Severin, starting with preparations in the bridal suite as ace photographer Andrew Scalini and I captured the moments, and on through an eloquent and educational ceremony courtesy of Dr. Scott Toussaint. John had proposed to Jennifer with a ring hidden inside a pumpkin (now there’s a trick AND a treat!), so a pumpkin theme was evident throughout The Painted Daisy‘s splendid reception decor, in the jars at the tasty candy buffet, and atop the cake. But the most colorful sight to behold was DJ Sunny Moon‘s re-introduction of the couple in full traditional Vietnamese formal wear halfway through the evening.

A few months after their traditional Hindu ceremony out of town, Neha & Warren gathered with their friends and family for a beautiful wedding experience on a perfect summer-like weekend. The rehearsal dinner marked my first visit to the Obsidian Conference & Catering Center at the top of the Chase tower, and the views from the city’s highest point were unbelievable. The RCA Dome’s deflated roof was interesting to see, as were the nifty miniature stadium replicas Warren gave as gifts to his groomsmen.

The next day’s ceremony took place outside the Eiteljorg Museum, amid splendid decor (loved the arbor!) by Royal Creations and featuring a gorgeous sand ceremony presided over by Dr. Scott Toussaint. The reception was undoubtedly highlighted by the best man’s acoustic tribute to his brother’s love for Neha – and the Colts – as well as his performance of their first dance. The Wendy Reed Band took it from there, while Kahn’s Catering served up their usual amazing cuisine and Darcie of Circle City Planners (who along with the Eiteljorg referred the couple to us) kept everything running flawlessly. Sadly for me, this was the final wedding photo shoot for my dear friends Stacy and Mary, but I was honored to share one last wedding adventure with them.

Sonia & Chris pulled out all the stops for their huge wedding day, with much help from Tonya Shadoan of Circle City Planners, who generously referred them to us. Their ceremony took place under a white canopy in front of a striking sunset backdrop in the theater of the Scottish Rite Cathedral, lavishly decorated by Royal Creations. There were many tears shed by both bride & groom during the ceremony, and many smiles as they made their grand exit outside surounded by bagpipes, drums, and lots of airborne birdseed.

The reception at the Montage was on a scale unlike any I’ve seen there before. Dramatically lit red curtains lined the entrance, transporting the guests into an evening filled with jazz, amazing ice sculptures, excellent food by Kahn’s Catering, moody lighting by Evans Audio Visual, and great dance music by Lakeside Entertainment, capped off by a spectacular fireworks display. I got a kick out of the surprise groom’s cake – a jet ski, every bit as sweet as the couple themselves. I also enjoyed working with Crowe’s Eye Photography for the first time at such a fantastic event.

Jennifer & Casey tied the knot at the Eiteljorg Museum on a perfectly crisp fall day that kicked off the best October weather-wise I’ve ever experienced. Casey was so obviously passionate about Jennifer, even carrying with him the ticket stub from their first date as well as an old cocktail napkin with a message that sealed their relationship. They exchanged vows in the circular outdoor garden in front of a gorgeous dusk horizon.

In an interesting twist I’ve never seen there before, everyone went inside for cocktails, toasts and cake cutting before returning to the transformed outdoor areas for a wonderful dinner provided by Kahn’s Catering amidst a sea of tremendous floral arrangements by Alan Thompson of McNamara Florist. Dave and Rae‘s full band provided the usual spectacular music that had everyone asking for more while Jason Miller of Silvertree Photographics captured all of the evening’s fun.

Heather’s sense of humor had me in stitches from my very first conversation with her, and her wedding day with Matt was every bit as colorful, thanks to the pastel rainbow colors throughout the dresses and the decor. After a short but sweet ceremony at the Omni Severin, we all hopped on a horse carriage ride and headed to Monument Circle for some fun poses with photographer and former client Zach Dobson. The festivities continued at the Omni afterwards, capped by the presentation of a cool handcrafted quilt to the couple. The technically inclined groom gave out some awesome gifts as well that really spoke to me – tiny flash drives containing a photo slideshow that he had created.