Lindsey & Danny are one of the most hilarious couples I’ve ever worked with, and their wedding day at my old stomping grounds of Bloomington, Indiana was full of fun, laughter and perfect weather.  After a sweet first meeting at the Wells House, a popular Indiana University hotspot filled with romantic tradition, we headed around campus for photos with Lisa Walker Photography‘s team on the way to the ceremony at First United Methodist Church.
The reception took place inside the Indiana Memorial Union‘s Alumni Hall, which was amazingly adorned by consultant and designer Cathy Teeters, who referred Lindsey & Danny to us.  For the second time in two years, we got to see a Bloomington reception get rocked by the terrific band Stretta out of Nashville, who nearly had the show stolen from them by the happy couple when they got onstage for a couple of showstoppers. 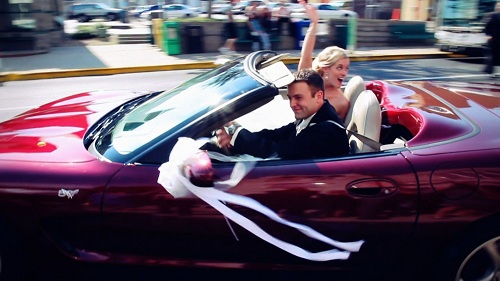