Sijia & Matt enjoyed a picture-perfect fall day for their wedding and reception at the Mansion at Oak Hill.  Along with Dawn & Mike Fisher of Galleria Studios (who referred the couple to us), we captured some nice shots under the canopy of trees which later became the backdrop for their beautiful and emotional ceremony, highlighted by a unique rose ceremony that Sijia & Matt will recreate on their anniversaries.  The bride looked stunning in her dress as well as makeup by Karen Hall.  The flowers by Jan Johnson of Belle Fleur added elegance to the ballroom for the reception, which was expertly presided over by Jeremy Gearries of DJs Direct.  The big day concluded in style with Sijia & Matt’s grand exit in an Antique Limousine provided by Jack Gambs. 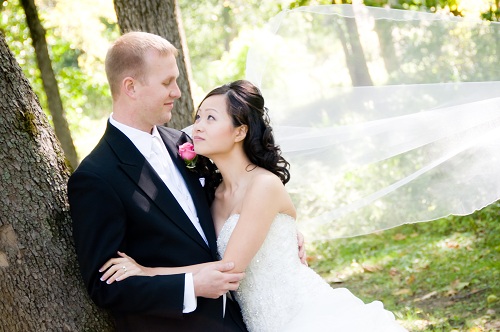